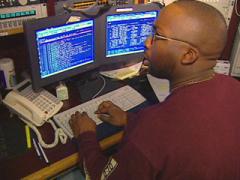 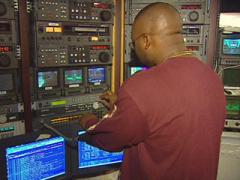 Broadcast Technicians are responsible for setting up, operating, and taking care of a wide variety of broadcasting equipment used for television shows, radio broadcasts, or movies. The equipment can be used for live production or for recording the broadcast. Most broadcast technicians work at radio and television studios, where they take charge of the equipment used for broadcasting or recording radio or TV shows. Others work on movie sets. The type of equipment they use includes microphones, cameras, consoles, computers, and tape recorders.

Broadcast technicians who work for small television or radio stations are generally versatile and perform a variety of duties, whereas those employed by large stations tend to specialize. There are a number of specialties in this field, including the following:

Before initiating a broadcast, technicians conduct tests to ensure that signals work properly. During the broadcasting of TV or radio shows, broadcast technicians focus on controlling the quality of the sound and/or picture. To do this, they operate control panels that cause camera angles to be switched, sound volumes to be raised or lowered, and special effects to be inserted. When broadcasting news programs, technicians operate controls that shift from studio coverage to on-the-scene reporting. They also use controls that allow switching between local sources and satellite feeds in order to blend national and local coverage within a broadcast. When making any of these switches, technicians typically rely on cues from program directors that alert them to when the switch should happen. Communication with co-workers during filming and broadcasting is normally accomplished through the use of hand signals and headsets.

When recording programs, technicians first map out which cameras, microphones, and equipment should be used for the particular show being recorded. They then review the script so that they know in advance when to make switches involving cameras and other equipment. They also plan the insertion of commercial breaks. Field technicians prepare for broadcasts of news events by driving vans to the event site, where they discuss equipment placement with reporters and camera operators. They then set up the equipment in a manner which maximizes the clarity of signals recorded or transmitted back to the studio.

Broadcast technicians are also responsible for installing new equipment to keep pace with changes in technology. As an example, many stations have recently changed from analog to digital signals. Broadcast technicians also maintain logs of all programs aired or recorded and later file the programming logs with the FCC. Additional duties that are often performed by broadcast technicians include the following:

Most broadcast technicians work indoors in comfortable surroundings; however, some of them do much of their work outdoors in all types of weather. Depending on the specific job, technicians may undergo a lot of physical activity or may be mostly sedentary. Those who do maintenance may need to climb poles or antenna towers, while those who set up equipment may need to do heavy lifting. While most broadcast technicians work a 40-hour work week, many of them often work overtime or weekends to meet broadcast deadlines. Evening, night, and weekend shifts are common in the profession due to the fact that many stations are on the air 24 hours a day, seven days a week.

As is the case with many professions, the job has both its good points and bad. Broadcast technicians often get a feeling of accomplishment by being able to see the immediate results of their work. The job allows technicians to be creative in an occupation where the results of their work are viewed by many. There is a good deal of autonomy, as technicians often make decisions without consulting with a supervisor. On the other hand, there is often pressure to meet deadlines and this can sometimes be mentally and physically exhausting. There is also pressure associated with the job's demand for accuracy, where errors can negatively impact the quality of the broadcast.

Important skills needed in this profession include an ability to communication well, both orally and in writing; manual dexterity; attention to detail; and reasoning and problem solving skills. Technicians also need to be skilled in information technology due to the widespread use of digital recording, editing, and broadcasting. Not surprisingly, a very important trait for a good broadcasting technician is an aptitude for working with electronic and mechanical systems.

According to the U.S. Department of Labor Bureau of Labor Statistics (USDL BLS), employment of broadcast technicians is projected to grow roughly as fast as the average profession over the next decade. There will be a considerable amount of job growth in the movie and cable TV industries as cable companies continually expand the number of channels they carry. Growth in the radio and TV broadcasting industry will be slower, owing to the emergence of labor-saving technology such as remotely controlled transmitters and computer-controlled programming. Another factor slowing job growth in radio and television is the consolidation of station ownership, which results in more stations being manned by fewer technicians.

Technicians who can install and operate digital transmitters are currently in high demand as television stations are converting from analog to digital broadcasting in compliance with a law that mandates the phasing out of analog signals by February 2009. Although there is no comparable law regulating the radio industry, many radio stations are beginning to broadcast digital signals as well.

Competition for jobs is expected to be most intense in major metropolitan areas, where stations tend to seek highly experienced personnel to fill a limited number of available openings. Job prospects for entry-level positions in smaller cities and towns, however, should generally remain strong.

Although there are no set-in-stone educational requirements for broadcast technicians, the best way to enter the profession is to have at least a high school education (or GED equivalent) plus some level of job-related postsecondary coursework from a technical school or college. An associate degree in broadcast technology, electronics, computer networking, or a related field is highly recommended. Those still in high school who are contemplating a career in this field should consider courses in electronics, computers, math, physics, and theater arts.

The Telecommunications Act of 1996 eliminated a previous FCC requirement that broadcast technicians be licensed. Consequently, there are no current licensing or certification requirements in any state. However, voluntary certification by the Society of Broadcast Engineers is a widely-respected credential which is likely to enhance employment prospects. There are several levels of certification awarded to experienced technicians who are able to pass an examination. Specifically, the Certified Radio Operator and the Certified Television Operator designations effectively fill the void left by the elimination of the FCC license. Once employed, many technicians learn their skills on the job from more experienced technicians. Also, many employers pay tuition and expenses for courses or seminars to help their technicians keep current with developments in the field.

Approximately 12% of broadcast technicians are self-employed. The rest are mostly employed by radio stations, television stations, and motion picture and video production companies. Generally speaking, there are more jobs at television stations than radio stations, but jobs at both sites can be found in nearly all cities. Radio jobs can also be found in many small towns. The most prestigious TV/radio jobs in this field are concentrated in the big cities that originate many network and news programs, i.e., New York City, Los Angeles, Chicago, and Washington, DC. Jobs in movie production are concentrated in Los Angeles and New York City.

Schools for Broadcast Technicians are listed in the column to the left.

Below are the work styles involved in being broadcast technicians according to their importance on the scale of 1 to 5 (1 being lowest and 5 being highest).

Listed below are the 10 largest metro areas based on the total number of people employed in Broadcast Technicians jobs , as of 2019

Total employment and salary for professions similar to broadcast technicians

Our Partner Listings
In this guide
Broadcasting Schools by State

We have some additional detailed pages at the state level for Broadcast Technicians.