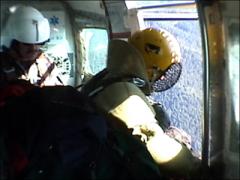 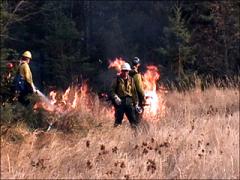 Fire fighters protect the public and property from the dangers of fire. Typically, fire fighters deal with other types of emergencies more often than fires. Firefighters are often the first emergency workers at the scene of a medical emergency or traffic accident. They treat injuries and perform other vital tasks. The vast majority of fire fighters are employed by local governments.

While on duty, fire fighters need to be prepared to immediately respond to a fire or other types of emergencies. At emergency scenes, fire fighters perform specific tasks assigned to them by a superior officer. A firefighter's duties can change several times while the crew is at a scene. Sometimes they stay at a disaster location for days assisting with medical treatments and rescuing people that are trapped.

When firefighters are not dealing with emergency situations they clean and maintain their equipment and sometimes learn additional job related skills. They also participate in physical fitness activities and conduct practice drills.

Firefighters work in various environments including rural areas, metropolitan areas, chemical plants, industrial sites and airports. Some fire fighters are part of hazard material units that are trained for the cleanup and prevention of hazardous materials.

Those that specialize in forest fires use different equipment and methods than other fire fighters. When a forest fire occurs, these workers attempt to suppress the fire with heavy equipment and water hoses. They construct fire lines which involves cutting down trees and removing combustible types of vegetation that are in the path of a fire in order to deprive the fire of fuel. Smoke Jumpers are elite firefighters that parachute from airplanes in order to get to fire areas that are very hard to reach.

They spend a lot of time at fire stations which are typically similar to dormitories. Fire fighting has a high risk of injury or death. They may also come into contact with radioactive materials and flammable, poisonous or explosive gases and chemicals which can have immediate or long-term negative effects on their health.

Fire fighters should have courage, mental alertness, strength, endurance and mechanical aptitude. They should also have a desire to serve the public. Since members of fire fighting crews live and work closely together they need to be able to get along well with others.

Many firefighters work about 50 hours per week or more. In some agencies, firefighters are on duty for 24 hours which is followed by being off duty for 48 hours and they get an additional day off at intervals. Other fire fighters have different types of work schedules. Fire captains and lieutenants often work the same hours as the firefighters they oversee.

The Bureau of Labor Statistics forecasts a 19 percent employment growth for fire fighters between 2008 and 2018 which is faster than average for all occupations. Keen competition is expected for fire fighting jobs. Those that score the highest on mechanical aptitude and physical-conditioning exams have the best opportunities. Individuals that have also completed some fire fighter education at a community college and have paramedic or EMT certification have an additional advantage.

The median annual earnings for fire fighters in 2008 was $44,260. The highest paid 10 percent earned more than $72,210. Fire fighters typically have pension plans.

Applicants for fire fighter positions are usually required to have a high school diploma. Completing some secondary education or achieving an associate degree in fire science may improve a candidates chances for getting a job. Numerous colleges and universities offer two-year and four-year degrees in fire engineering or fire science.

Entry-level firefighters in large fire departments are trained for several weeks at the department's academy or training center. Practical training and classroom teaching are provided. After they complete their training they undergo a period of probation at a fire company. Many fire departments provide accredited apprenticeship programs which last up to four years, including programs in fighting forest fires. These programs combine on-the-job training with formal instruction.

Candidates for municipal firefighter positions typically are required to pass a written exam and tests of physical stamina, strength, coordination and agility as well as a medical examination that includes drug screening. Candidates that achieve the highest scores in all areas of testing have the best chances for getting a job.

The top employers are local governments.

Schools for Fire Fighters are listed in the Browse Schools Section.

Below are the work styles involved in being fire fighters according to their importance on the scale of 1 to 5 (1 being lowest and 5 being highest).

Listed below are the 10 largest metro areas based on the total number of people employed in Fire Fighters jobs , as of 2019

Total employment and salary for professions similar to fire fighters

Our Partner Listings
In this guide
Fire Fighting Schools by State

We have some additional detailed pages at the state level for Fire Fighters.