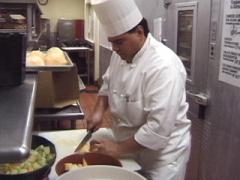 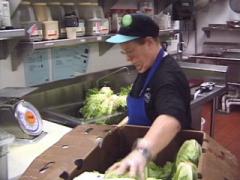 Food preparation workers perform a variety of tasks such as preparing vegetables and meats, making salads, weighing and measuring ingredients and stirring sauces. They also arrange the food on serving dishes. Providing pots and pans for chefs and cooks is often part of the job. Those working in cafeterias and large restaurants often work in an assembly line. Also, they're responsible for cleaning work areas and equipment. Food preparation workers are employed in restaurants, cafeterias, grocery stores and specialty food stores. They're supervised by chefs and cooks.

They must work quickly, be efficient and work well as part of a team. Good manual dexterity is also important. Food preparers often deal with pressure during busy periods. Standing for long periods of time is also part of the job. In addition, part-time and full-time positions are provided. Variable work schedules are typically available.

The growth in employment in the industry will occur due to a growing population and the convenience of eating at restaurants and purchasing carry-out meals from a variety of places. Also, a large number of workers leave the occupation and have to be replaced.

Seasonal employment is provided by resorts. Those employed in upscale restaurants typically work more hours per day due to the amount of time required to prepare the ingredients in advance.

The median annual earnings for food preparation workers in 2006 was $17,410. Those that work full-time often receive benefits. In addition, in some large restaurants and hotels, kitchen workers are members of a union.

A high school diploma is usually not required. Most food preparation employees receive on-the-job training. The training includes food handling and preparation, basic sanitation and workplace safety. A number of high school and vocational schools provide courses in food safety and food handling procedures. Some school districts, in partnerships with state departments of education offer on-the-job training and summer workshops for cafeteria workers who desire to become cooks. In addition, those that show skills and leadership abilities may advance into supervisory positions. Some also advance into jobs as cook assistants or line cook positions.

Schools for Food Preparation Workers are listed in the Browse Schools Section.

Below are the work styles involved in being food preparation workers according to their importance on the scale of 1 to 5 (1 being lowest and 5 being highest).

Listed below are the 10 largest metro areas based on the total number of people employed in Food Preparation Workers jobs , as of 2019

We have some additional detailed pages at the state level for Food Preparation Workers.