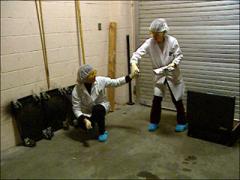 Forensic science technicians investigate crimes. They document crimes scenes with photographs and written reports. Forensic science technicians collect, store, test and evaluate evidence. Technicians utilize various types of equipment such as ultraviolet light, microscopes, spectrographs, x-ray machines and infrared photography. They also provide reports which include documentation of their findings and include the laboratory techniques which were utilized. Their findings often help to determine if a defendant is innocent or guilty of a crime.

Sometimes they may offer information and expert opinions to investigators. In addition, forensic science technicians often appear in court to provide expert witness testimony regarding laboratory findings. While in court, they typically identify and classify evidence that was collected at crime scenes.

Technicians must be detailed oriented, precise and methodical. They also need good communication and organizational skills. Regarding their work environment, the laboratories are typically ventilated and clean. Due to being in contact with physical evidence they are sometimes exposed to diseases, fumes and chemicals. They often wear protective and disposable clothing such as paper suits and gloves.

Advancement opportunities are provided by taking civil service examinations. The exams typically require knowledge of the latest techniques in the profession. Some may advance to supervisory jobs.

The bachelor's degree programs that have received accreditation from the American Academy of Forensic Science typically take five years to complete. Two-year programs are also available but the trend is towards hiring those with bachelor's degrees in the subject. Some colleges offer a master's degree in the topic.

Often forensic science technicians have to pass a background check and a drug test. Also, they cannot have a criminal record or a history of drug use.

Schools for Forensic Science Technicians are listed in the Browse Schools Section.

Below are the work styles involved in being forensic science technicians according to their importance on the scale of 1 to 5 (1 being lowest and 5 being highest).

Listed below are the 10 largest metro areas based on the total number of people employed in Forensic Science Technicians jobs , as of 2019

We have some additional detailed pages at the state level for Forensic Science Technicians.