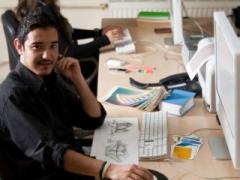 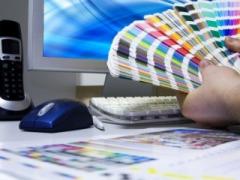 A graphic designer, also called a graphic artist, communicates ideas visually by creating effective and appealing web pages, illustrations, marketing campaigns and other print and media art. Employment can vary for graphic designers as they can work regular hours at a large company or on a job basis as consultants or freelancers. They can typically find employment at newspapers and magazines as well as in corporate businesses, advertising agencies, marketing companies and design firms.

To become a graphic designer, you'll need to earn a bachelor's degree in graphic design or fine arts from a college, university or private design school. Most schools require students to successfully complete a year of basic art and design classes before entry into a bachelor's degree program. Degree coursework often includes, but is not limited to, studio art, website design, printing techniques, computerized design and commercial graphics production. In addition to these art and design courses, it may be helpful to take classes in psychology, foreign languages, cultural studies, marketing and business. Creativity, communication and problem solving skills are also important; as is the ability to work under pressure. Earning a degree from one of the many graphic design schools in Maryland is a great way to start your career as a graphic artist.

Browse the list of Maryland graphic design schools below and start your career today.

Salaries for Graphic Designers in Maryland