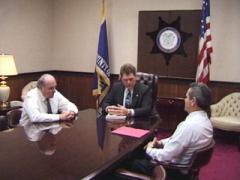 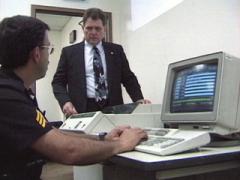 Police officers employed in large cities often work as patrol officers assigned to either crime prevention or traffic control. A patrol officer sometimes has to testify in court or act as a witness in criminal and traffic cases.

A number of urban based police departments are involved with community policing - a system where police officers build relationships with people living in local neighborhoods and they also ask the public to help fight crime.

The job can sometimes be dangerous and stressful. Many officers observe death and suffering. Police officers typically work 40 hours a week, however paid overtime is common. Shift work is required since around the clock protection needs to be provided to communities. Junior officers often work nights, weekends and holidays. Police officers must work whenever they are needed.

Patrol officers should enjoy dealing with the public. Personal characteristics such as integrity, honesty, good judgement and a sense of responsibility are important for the occupation.

The Bureau of Labor Statistics projects the employment of police officers and detectives will grow 11% from 2006 to 2016 which is about as fast as average for all occupations. Population growth is a significant factor for the increasing demand for police services. The level of government spending is a major factor in determining the number of officers that are employed.

Police officers are typically eligible to be promoted after a probation period which ranges from six months to three years. Some police officers are promoted to a detective position. A candidate's position on a promotion list is typically determined by written examination scores and on-the-job performance. Promotion to higher level positions such as corporal, sergeant, lieutenant and captain are typically determined according to a candidate's position on the promotion list.

In numerous communities police patrol officer candidates have to meet minimum requirements for height, weight, hearing and eyesight. Since most police departments have to meet civil service regulations, applicants need to pass a written test that measures their analytical skills. Background checks and physical examinations are also required. Their character traits are typically investigated. Some police departments have candidates interviewed by a psychiatrist or a psychologist or take a personality test.

Typically, new recruits are involved in classroom training at police academies. Upon graduation they receive additional training by experienced police officers for three months to a year. Police departments in small communities may not provide a formal training program.

The major employers of police patrol officers are local governments.

Schools for Police And Sheriffs Patrol Officers are listed in the Browse Schools Section.

Below are the work styles involved in being police and sheriffs patrol officers according to their importance on the scale of 1 to 5 (1 being lowest and 5 being highest).

Listed below are the 10 largest metro areas based on the total number of people employed in Police and Sheriffs Patrol Officers jobs , as of 2019

We have some additional detailed pages at the state level for Police and Sheriffs Patrol Officers.