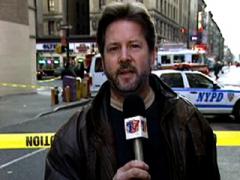 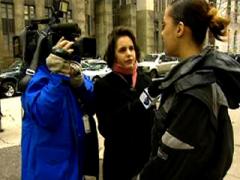 Reporters are a type of journalist. They investigate, analyze, and prepare the facts of a newsworthy event or issue for the purpose of disseminating and informing the public through mass media such as newspapers, news magazines, documentaries, television, radio, and the Internet. Stories covered by Reporters can be written or spoken and are expected to be delivered in an objective and unbiased manner. Stories range from local, to state, to world events, as well s occurrences focused on the actions and words of people in public office and entertainment, and those in positions of power and influence. Other titles for individuals in this profession include News Reporter, Television (or TV) Reporter, General Assignment Reporter, and News Director.

Some Reporters are tasked/assigned with covering special interest stories such as education or crime (or police beats). Those who are employed by large television or radio stations and newspapers typically specialize in covering specific fields of interest such as health, science, religion, consumer affairs, sports, or theater. Reporters who are employed by small publications generally cover all facets of the news and perform a variety of functions that include but are not limited to: writing headlines and editorials, taking photographs, creating page layouts, editing wire-service stories, selling subscriptions, and soliciting advertisements.

Reporters gather and investigate information through a variety of ways that include witnessing an event first-hand, interviewing people, receiving 'tips' from reliable sources, reading press releases, and learning about special announcements - all the while verifying all pieces of information. Reporters divide their time between performing the groundwork for a story and time spent in a newsroom where they (typically) write their stories and review and edit associated videos. In some circumstances, a Reporter will submit the information they've gathered and a news writer will write the story. At times, the Reporter may subsequently tape a commentary on, or introduction to, a story (from the studio). Investigative Reporters cover events that can easily take anywhere from several days to weeks to gather information and work on stories.

When writing a story, a Reporter takes into consideration the editorial style of the agency or organization for whom they are working. For example, TV and radio Reporters will consider the format of the TV or radio show from which their report will be delivered. Generally, these types of Reporters write their stories and broadcast live from the scene of the event or news source.

Most Reporters work a full-time schedule; some work part-time. Due to the demanding and hectic nature of this profession, an individual can expect to work long and irregular hours; deadline pressures are extremely high. Reporters will, at times, experience interruptions during their workday and may be required to modify their schedule to jump on a late-breaking event or meet a deadline. They may also be required to travel, typically in a car, van, or truck. Morning newspaper Reporters generally work from late afternoon until midnight; magazine Reporters work daytime hours; and, TV and radio Reporters work (or are assigned) to a day or evening shift.

Reporters work both indoors and outdoors. The offices in which Reporters work vary, where some work in private, comfortable offices, while others work in large rooms with other Reporters where they contend with the sounds of voices, computer printers, keyboards, phones, etc. Reporters who broadcast directly from an event location have their own set of issues to contend with as they may have their attention diverted by various emergency workers and curious onlookers. And, it goes without saying that covering fires, floods, protests, war, and events similar in nature are dangerous.

The key skills and abilities possessed by an individual in this profession include:

Individuals are also expected to have a strong command of the English language, knowledge of computer software and hardware, and telecommunications equipment, as well as a strong sense of the principles of business and management. It is also helpful for an individual to possess desktop publishing and graphics skills, as well as knowledge of news photography (will likely come in handy for those just entering the profession as their responsibilities may combine reporting with photography).

The U.S. Department of Labor Bureau of Labor Statistics (USDL BLS), which combines employment forecasting for Reporters with News Analysts and Correspondents, expects a two percent growth between 2006 and 2016, which is considered "little or no change in employment." Differing factors are expected to contribute to the slow growth in this profession. For example, in the broadcasting and publishing industries, consolidations and mergers will enable organizations to better allocate Reporters, News Analysts, and Correspondents when assigning and covering stories. Technological advancements will continue to play its part as workers will increasingly be better equipped to efficiently cover stories or specific news events, resulting in a reduced number individuals needed to participate in story/news coverage. On the flip side, the demand for news will continue to foster employment opportunities and replacements will be needed for individuals who leave their occupation, or move on to other roles.

Prospective employers prefer individuals who possess a bachelor's degree in journalism or mass communications to those without. It is worth noting that newspapers and broadcasting stations in large cities may prefer journalists who are degreed in a specific subject area such as political science or economics; they may also lean toward hiring only experienced Reporters.

According to the U.S. Bureau of Labor Statistics, greater than 1,500 institutions offer programs in journalism, communications, and other related programs. In 2007, the Accrediting Council on Education in Journalism and Mass Communications accredited 109 of the 1,500. In general, program courses are focused in two areas: liberal arts and journalism.

Liberal arts courses that would be helpful to individuals entering this field include English with a focus on:

Other helpful courses include business, computer science, and speech. Courses in radio and television news and production will be important to those seeking a career in broadcasting. And, for those seeking careers in magazines and newspapers, specializing in news-editorial journalism will be equally important. Because an individual in this role, creates stories for online media they will be required to learn and apply the skills needed to use computer software in order to merge an online story with video and audio graphics and elements.

It is worth noting that prospective employers tend to seek individuals with prior experience from a variety of sources (e.g., as a newspaper stringer or freelancer; experience from working in broadcasting stations, high school or college newspapers, and internships with news organizations).

For individuals in or entering high school, a good foundation in this profession can start with courses in journalism, English, and social studies.

In general, a Reporter will begin their career as Copy Editor or General Assignment Reporter in a small broadcast station or publication. As they hone their skills, broaden their knowledge, and gain their experience, they will report on more difficult events and assignments or focus in a specific field. Some individuals advance in their career by: moving on to larger broadcast stations or publication; becoming publishing or broadcasting industry managers; or taking on supervisory roles, positions as Program Managers in broadcast journalism, or Editors in print journalism.

According to the USDL BLS (grouping together Reporters, News Analysts, and Correspondents), "competition will continue to be keen for jobs on large metropolitan and national newspapers, broadcast stations and networks, and magazines. Small broadcast stations and publications and online newspapers and magazines should provide the best opportunities." Additionally, writers who are adept at "highly specialized scientific or technical subjects," will find themselves having the advantage.

Schools for Reporters are listed in the column to the left.

Below are the work styles involved in being reporters according to their importance on the scale of 1 to 5 (1 being lowest and 5 being highest).

Our Partner Listings
In this guide
Reporting Schools by State

We have some additional detailed pages at the state level for Reporters.