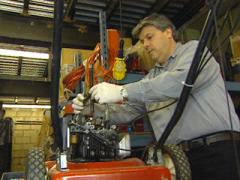 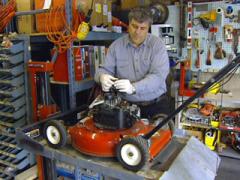 Small engine techs, also known as small engine mechanics, service and repair a variety of power equipment including chainsaws, lawnmowers, motorboats and motorcycles. Small engine technicians often specialize in a particular type of equipment, however they may also service and repair closely-related equipment. They use a variety of techniques to diagnose problems. They replace or repair defective components. They also take apart engines and look for signs of wear and tear. Small engine techs perform routine maintenance on engines and they sometimes perform a complete engine overhaul.

Due to the complexity of motor boats and motorcycles, some employers prefer candidates that have completed a formal training program. However, most small engine mechanics acquire their skills through on-the-job training or while being employed in related occupations. It may take three to five years of on-the-job training before a small engine tech becomes competent in all the elements of repairing motorboat and motorcycle engines. Due to less moving parts, less training time is required for outdoor equipment. Mechanics that seek to perform warranty work for manufactures and insurance companies are typically required to take manufacturer training programs.

Small engine mechanics need the skills to diagnose fuel, mechanical and electrical problems and to make repairs. Small engine mechanics should have good problem solving abilities and be detailed oriented. They need the skills to use computerized engine analyzers, ammeters, voltmeters and compression gauges and other types of testing devices. Supervisor and management positions usually require leadership ability and experience. Those with experience and sales ability may become sales representatives.

Small engine technicians typically work in well lighted and ventilated repair shops. Motorboat mechanics sometimes have to work outdoors in harsh weather conditions while repairing engines. They might also have to work in awkward or cramped positions in order to reach the boat's engine. Small engine mechanics may work less than 40 hours per week during the winter due to a decline in the use of motorboats, lawnmowers and motorcycles. However, they often schedule engine overhauls during the slow winter months. Usually, small engine technicians work full-time only during the spring and summer. During periods of high demand they may work significantly more than 40 hours per week.

The Bureau of Labor Statistics forecasts 12 percent growth in employment for small engine mechanics from 2006 to 2016 which is about as fast as average for all occupations. The growth of jobs is expected to be higher for motorboat and motorcycle mechanics than for outdoor equipment mechanics. Some of the major employers of small engine mechanics are motor vehicle dealers which includes boats and motorcycles. Retail hardware lawn and garden stores are also major employers. Small engine techs are also employed by small engine repair shops, equipment rental companies, marinas and boatyards, landscaping services and wholesale distributors. Employers prefer applicants that have knowledge of both 2 and 4 stroke engines and other types of emissions reducing technology. Some small engine techs are self-employed. The average yearly income in 2009 for small engine mechanics was $28,887.

Schools for Small Engine Mechanics are listed in the Browse Schools Section.

Below are the work styles involved in being small engine mechanics according to their importance on the scale of 1 to 5 (1 being lowest and 5 being highest).

Listed below are the 10 largest metro areas based on the total number of people employed in Small Engine Mechanics jobs , as of 2019

We have some additional detailed pages at the state level for Small Engine Mechanics.