Coronado, California, in San Diego county, is 2 miles SW of San Diego, California. The city benefits from easy access to the nearby cities and towns with which it shares the San Diego metropolitan area.

Spanish navigator Sebastian Vizcaino first sighted the Coronado Islands of San Diego on November 8, 1602. Vizcaino named the islands 'Las Yslas Coronadas,' meaning 'the crowned ones.' The present day city of Coronado derived its name from these islands. During 1885, Elisha S. Babcock, Jr. and Hampton L. Storey visited the island to hunt rabbits and decided to set up a luxurious resort hotel. In 1888, the Hotel Del Coronado was opened. In fact, this hotel is a National Historical Landmark of Coronado. Military and aviation also form an essential part of Coronado's history. The first traffic control signal light of Coronado was installed on August 2, 1969. On the very same day, the San Diego-Coronado Bay Bridge was opened.

Coronado and nearby Attractions

Things To Do In Coronado

The city of Coronado is one of the most beautiful beachfront cities of the world. The city also offers a municipal golf course, a tennis center, parks, theaters, restaurants, playgrounds, swimming and fishing facilities and other water sports.

San Diego City College is nearby. 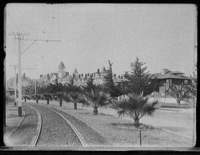 Are you an official in the Coronado government or quasi-government agency such as the chamber of commerce, visitors bureau or economic development council? If so, visit our information page for government officials to see how CityTownInfo can support you.