Los Banos, California, in Merced county, is 26 miles SW of Merced, California (center to center) and 60 miles E of San Jose, California. The city benefits from easy access to the nearby cities and towns with which it shares the Merced metropolitan area.

Gabriel Moraga, with his troop of Spanish Calvary from the Presidio of San Francisco, came to explore the San Joaquin Valley in 1805 under orders from the Spanish Governor of California. He came upon the City of Los Banos. The region was inhabited by local Native Americans. The next Spanish explorer to come here was Padre Felipe Arroyo de la Cuesta. Henry Miller came to San Joaquin Valley around 1850 and by 1871 he formed the San Joaquin and Kings River Canal and Irrigation Company. Miller made a great effort to get the railroad extended through the West Side and that ultimately decided the location of Los Banos. Agriculture still remains the number one industry in and around Los Banos, mainly due to the early success of Henry Miller.

Los Banos and Nearby Attractions

Things To Do In Los Banos

Los Banos is a place of abundant natural beauty and has many well maintained parks with new playground structures built for children. There are many recreational activities for the people staying in the city. Some of the popular things to do include aikido martial arts, basketball for youth, diving classes, swimming, dog training, pee wee ball, seniors' activities, soccer, softball and summer camps.

The city is served by Merced College. 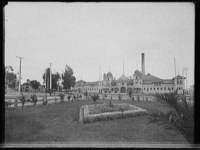 Bath house between 1900 and 1920
Additional Resources

Are you an official in the Los Banos government or quasi-government agency such as the chamber of commerce, visitors bureau or economic development council? If so, visit our information page for government officials to see how CityTownInfo can support you.