Ormond Beach, Florida, in Volusia county, is 5 miles NW of Daytona Beach, Florida (center to center) and 80 miles SE of Jacksonville, Florida. It's part of the Greater Daytona Beach area and is situated along the Halifax River lagoon and the Atlantic Ocean. Ormond Beach Business Park and Airpark is designated a foreign trade zone and includes numerous companies.

Education, health care and government are the region's major employers. Command Medical Products, The Tanning Research Laboratories of Hawaiian Tropic, Hudson Tool and Die Company and Homac Manufacturing Company are located in the city. The climate is humid subtropical and includes dry, mild weather during the winter.

The Timucuan Indians lived in the area, but over time, war and disease decimated the Indians. The city is named in tribute to James Ormond, a sea captain who transported Franciscan settlers to the region on behalf of Ferninand VII of Spain. The Second Seminole War postponed the establishing of settlements until 1842. The city was incorporated in 1880. Ormond Beach and other parts of Florida became popular destinations for the wealthy who desired to escape the harsh northern winters. Numerous Gilded Age hotels were constructed to accommodate the visitors.

The well known John D. Rockefeller purchased a winter home known as "The Casements." In 1902 some of the initial automobile races occurred on the hard packed sand from Ormond south to Daytona Beach. Timing equipment was utilized and the region was given the nickname "The Birthplace of Speed." In 1949 the municipality was renamed Ormond Beach.

Air travel is provided at the Daytona Beach International Airport. 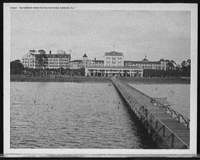 The Hotel Ormond from the Halifax River between 1900 and 1920

The Hotel Ormond from the Halifax River between 1900 and 1920

Hotel Ormond from across the Halifax between 1900 and 1915

Are you an official in the Ormond Beach government or quasi-government agency such as the chamber of commerce, visitors bureau or economic development council? If so, visit our information page for government officials to see how CityTownInfo can support you.