Alton, Illinois, in Madison county, is 10 miles NE of Florissant, Missouri (center to center) and 18 miles N of St. Louis, Missouri. The people of the city are in the Saint Louis metropolitan area.

Native Americans were the original inhabitants of the area now known as Alton. Rufus Easton developed this place as a river town in the year 1818 and named it 'Alton' after his son, Alton Easton. As it was located at the confluence of the Illinois, the Mississippi, and the Missouri rivers, Alton soon grew into an industrial town.

Alton and nearby Attractions

Things To Do In Alton

Historic sites such as the Campbell House and the Scott Joplin House State Historic Site are near the city of Alton. One can also visit the nearby museums such as the Missouri Historical Society Museum, the Saint Louis Holocaust Museum, and the Armed Forces Museum. There are also a number of public libraries, city halls, and rest homes in Alton. The banks of the Alton Lake, the East Fork Wood River, and the Shields Branch are popular tourist haunts. The Spencer T. Olin Golf Course and the Alton Municipal Golf Course are ideal for lovers of the game. There are also a large number of churches, cemeteries, and amusement parks in Alton. Other places of interest near the city include the Saint Louis Zoo, the Missouri Botanical Garden, and the Sophia M. Sachs Butterfly House. The Alton Square Shopping Center provides excellent entertainment opportunities.

Air transportation is available from the St. Louis Regional Airport.

Opportunities for higher education are provided by the nearby Lewis and Clark Community College. Other institutes in the vicinity include the Saint Louis Community College-Florissant Valley and the University of Missouri-St Louis. 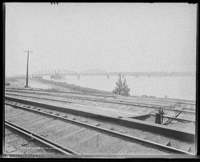 Are you an official in the Alton government or quasi-government agency such as the chamber of commerce, visitors bureau or economic development council? If so, visit our information page for government officials to see how CityTownInfo can support you.