The Kickapoo Indians were the original inhabitants. The first group of non-native settlers arrived in the 1820's. Farmers were attracted by the fertile soil and agriculture became an important factor for the economy. Downtown became a thriving agriculture and commerce center. It has been noted that Abraham Lincoln, while working in the field of law would do business in the town center.

In the year 1900 a major fire destroyed most of the downtown. During the early portion of the 20th Century, Bloomington experienced significant growth due to agriculture and the building of highways and railroads and the flourishing insurance companies, especially State Farm Insurance.

The Bloomington-Normal Constitution Trail provides opportunities for jogging, walking and cycling. The city is renowned for its golf courses. The Den at Fox Creek is a popular four star course. There are numerous other quality courses including Highland Park Golf Course, the Links at Ireland Grove, and Prairie Vista Golf Course. 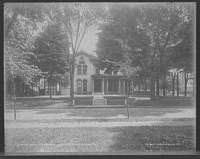 Track to be straightened in the Bloomington yards. between 1900 and 1905

Are you an official in the Bloomington government or quasi-government agency such as the chamber of commerce, visitors bureau or economic development council? If so, visit our information page for government officials to see how CityTownInfo can support you.