Elmhurst, Illinois is 8 miles W of Oak Park, Illinois (center to center) and 15 miles W of Chicago, Illinois. It is in Du Page County. The city is part of the Chicago metro area.

Elmhurst was originally inhabited by the Potawatomi Indian tribe. The area was first settled in by European immigrants around 1836. The Hill Cottage Tavern was opened in 1843. The area was named Cottage Hill in 1845. The Galena and Chicago Union Railroad entered the area around 1849. Cottage Hill was renamed Elmhurst in 1869 and officially incorporated in 1882. The Elmhurst Memorial Hospital was built in 1926.

Elmhurst and nearby Attractions

Things To Do In Elmhurst

You can enjoy a day trip with your family to the Elmhurst Salt Creek County Forest Preserve. Also worth visiting is the Conrad Fisher Park, Eldridge Park, Pluckett Park, York Commons Park, Crestview Park, and Pioneer Park. You can also visit the Elmhurst Historical Museum and Elmhurst Art Museum to learn more about the history of the city. Shopping can be enjoyed at the Elmhurst Crossing Shopping Center.

Chicago O’Hare International Airport is very close to the city.

Opportunities for higher studies are offered by Elmhurst College, College of Du Page and Triton College. 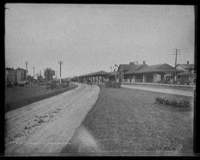 Are you an official in the Elmhurst government or quasi-government agency such as the chamber of commerce, visitors bureau or economic development council? If so, visit our information page for government officials to see how CityTownInfo can support you.