Geneva, Illinois, in Kane county, is 8 miles N of Aurora, Illinois (center to center) and 33 miles W of Chicago, Illinois. The city is included in the Chicago metropolitan area.

The area now known as Geneva was originally inhabited by the Prairie and Illinois Pottawatomi tribes. The first modern settler, Daniel Shaw Haight, arrived in this area in 1830. He built a cabin near the Fox Area and settled down there. The settlement was named Big Spring. Haight sold his claim to James and Charity Herrington in 1835. The Herringtons played a significant role in the establishment of the town of Geneva. It was incorporated as a city in 1887.

Geneva and nearby Attractions

Things To Do In Geneva

Geneva is reputed as a tourist destination. It is located in a scenic area along the Fox River. It is a lively city with several shops and restaurants. It also has an extensive bike trail which includes portions of the Fox River Trail. The Geneva Park District includes 50 parks and is spread over 700 acres. It offers approximately 3,000 programs annually. In addition, the park district also offers playgrounds, bike/pedestrian trails, a recreation center, and a skate park. 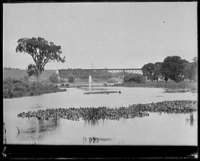 Geneva (from above railway bridge) c1898.

Are you an official in the Geneva government or quasi-government agency such as the chamber of commerce, visitors bureau or economic development council? If so, visit our information page for government officials to see how CityTownInfo can support you.