Cape Elizabeth, Maine, in Cumberland county, is 7 miles SE of Portland, Maine and 94 miles NE of Boston, Massachusetts. It is part of the surrounding Portland metro area.

Cape Elizabeth was explored in 1615 by John Smith. King Charles I named the town after Elizabeth of Bohemia, his sister and the eldest daughter of King James I. The area was first settled in by Europeans in the 1630s. Cape Elizabeth was incorporated as a town on November 1, 1765. Prior to incorporation, the town was a part of present-day Portland.

Cape Elizabeth and nearby Attractions

Things To Do In Cape Elizabeth

While at Cape Elizabeth, one can visit the Crescent Beach State Park and the Two Lights State Park. The Crescent Beach and the Cliff House Beach offers a number of recreational facilities. One can enjoy shopping at the Pond Cove Shopping Center. Tourists can also visit the Children's Museum of Maine, the Palace Playland, Old Orchard Beach and Higgins Beach.

Portland International Airport is nearby. 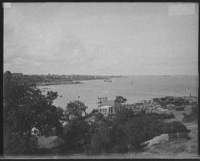 Portland harbor from Cape Cottage between 1900 and 1915

Portland harbor from Cape Cottage between 1900 and 1915

Portland Head Light and Cushing's Island between 1900 and 1906

Are you an official in the Cape Elizabeth government or quasi-government agency such as the chamber of commerce, visitors bureau or economic development council? If so, visit our information page for government officials to see how CityTownInfo can support you.