Portland is situated on a peninsula located along Casco Bay on the southern portion of the Maine coast. The historic Old Port area is a very popular tourist destination in Portland. The city is recognized as the economic and social center for the state of Maine. Over the years the economy of the city had been primarily based in fishing, agriculture and manufacturing. However, the city now has a more service based economy.

Christopher Levett is recognized as the first European settler in the area. Levett was an English naval captain and in 1623 created a settlement in the Casco Bay region. Another settlement was established by the English in 1632 and was primarily used for fishing and trading. The town was given the name Casco. The named had been changed to Falmouth in 1658. In 1675 during the King's Philip's War the Wampanoag natives destroyed the village. A new village was constructed and was again ruined by the Wampanoag. The village was then rebuilt and subsequently torn apart by the Royal Navy during the American Revolutionary War. After the war was over a portion of Falmouth known as "The Neck" became a thriving commercial port.

Falmouth Neck became a separate town and was given the name Portland in 1786. Portland was recognized as a major railroad location in the 20th century. The Great Fire which occurred in 1866 during an Independence Day celebration destroyed a vast majority of the commercial buildings and ruined hundreds of houses. The city was rebuilt and the new structures were made from brick and provided the city with a Victorian appearance.

Portland offers visitors numerous attractive historic buildings and a variety of other noteworthy attractions including:

Portland is home to one of the campuses of the University of Maine. The primary academic subjects taught at the Portland campus include business, modern and classical languages, computer science, English and math. Other colleges with campuses in the area include: 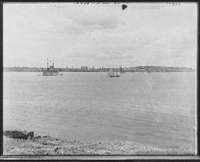 Are you an official in the Portland government or quasi-government agency such as the chamber of commerce, visitors bureau or economic development council? If so, visit our information page for government officials to see how CityTownInfo can support you.