The town of Amherst lies in the Connecticut River valley in Western Massachusetts, about 87 miles east of the state capital of Boston and 23 miles west of the city of Springfield. The town is home to the main campus of the University of Massachusetts (UMass) and is also home to Amherst College and Hampshire College. Unusual for towns of its size, Amherst maintains a traditional town meeting form of government, although the annual meeting is made up of elected representatives of each of the town's 254 precincts. Recent attempts to switch to a mayor-council form of government were rejected by voters in the town.

Originally settled in the 1730s as part of what is now the neighboring town of Hadley, Amherst became recognized in 1759 as a separate entity and was incorporated as a town in 1775. It was named in honor of Lord Jeffery Amherst, a hero of the French and Indian War. From its inception the town's focus was directed on education, an emphasis brought to fruition by the evolution of Amherst College from the former Amherst Academy in 1821, and the establishment in 1863 of the Massachusetts Agricultural School, later to become the University of Massachusetts. Over the years, Amherst has been home to an unusually large number of notable literary figures. Emily Dickinson was an Amherst native who spent her entire life as a town resident. Noah Webster, of Webster's dictionary fame, lived in the town, as did 20th century poets Robert Frost and Robert Francis and 19th century poet Eugene Field.

Attractions in and around Amherst

Amherst and its surrounding area are alive with many venues for cultural, artistic, musical, and theatrical expression. The Dickinson Homestead, birthplace and lifelong residence of poet Emily Dickinson, is now the site of the Emily Dickinson Museum. The Theodore Baird Residence is noteworthy for its architecture, which bears the stamp of famed architect Frank Lloyd Wright. The Fine Arts Center, located on the University of Massachusetts campus, is a hub of visual and performing arts, housing a large collection of artistic exhibits and hosting a wide range of musical, dance, and theatrical events. The Amherst History Museum features period rooms and special exhibits, and offers programs and events for all ages. The Pratt Museum of Natural History, located on the Amherst College campus, houses a comprehensive collection of artifacts including fossils, minerals, and geological items.

The University of Massachusetts athletic teams, known as the Minutemen, belong to the Atlantic Ten Conference (and the Hockey East Association). Beginning in 2007, the University's football team (along with the other Atlantic Ten football teams) will switch its conference affiliation to the newly-formed Colonial Athletic Association (CAA). The Minutemen compete in NCAA's Division I-A (Division I-AA for football). UMass has been especially prominent in the sport of basketball, having held the number one ranking in national polls for extended periods during the 1990s. Notable alumni include former NBA superstar Julius Erving.

Pro sports can be found about 30 minutes west in the city of Springfield, home to the Springfield Falcons of the American Hockey League (AHL). The adjacent town of West Springfield is home to the Massachusetts Twisters of the American Indoor Soccer League (AISL). The city of Boston, about 90 minutes away, is home to Major League Baseball's Boston Red Sox, the National Hockey League's Boston Bruins, the National Basketball Association's Boston Celtics, and Major League Lacrosse's Boston Cannons.

In this guide
Additional Details
Our Partner Listings
Historic Amherst 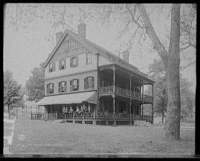 Are you an official in the Amherst government or quasi-government agency such as the chamber of commerce, visitors bureau or economic development council? If so, visit our information page for government officials to see how CityTownInfo can support you.