Brookline, Massachusetts, in Norfolk county, is 3 miles SW of Boston, Massachusetts. The town includes numerous distinct neighborhoods and areas. It's also known for upscale stores and village pubs and numerous large estates. It's bordered on three sides by the city of Boston and is regarded as a commuter suburb. Brookline includes a large number of Russian immigrants and a prominent Jewish culture.

The town is home to a large number of professionals and academics and is known for its liberalism. It features one of the oldest country clubs in the United States. The community is recognized for having excellent schools. President John F. Kennedy was born in Brookline.

The first European settlements were established during the early 1600's and the area was known as the Hamlet of Muddy River. In 1705 it was incorporated as Brookline. The name was given due to the brooks that established the town borders with the former towns of Roxbury and Brighton which are now included in the city of Boston. Throughout the years, the citizens of Brookline have refused to let their town become part of Boston. The Brookline-Boston annexation debate of 1873 resulted in the city keeping its independence from Boston.

The railroad arrived during the middle of the 19th century. A large portion of the city was developed as a streetcar suburb which included numerous apartment buildings made from bricks. During the 19th century the town was popular for summer homes for Boston's wealthy citizens.

The town includes numerous parks. The Larz Anderson Park includes an outdoor skating rink and is popular for sledding. Residents enjoy the entertainment and professional sports located in the Boston area.

The city is home to New England Institute of Art, Pine Manor College and parts of Boston University.

The city is served by the Logan International Airport located in Boston. The city includes light rail service. 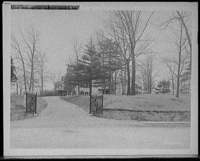 Are you an official in the Brookline government or quasi-government agency such as the chamber of commerce, visitors bureau or economic development council? If so, visit our information page for government officials to see how CityTownInfo can support you.