Concord, Massachusetts, in Middlesex county, is 8 miles NW of Waltham, Massachusetts (center to center) and 16 miles NW of Boston, Massachusetts. Concord is well known for its major roles in American history and literature and features a large number of historic sites. Welch's, the well known grape juice producer has a small headquarters in the city.

The area was initially named Musketaquid. The region's Indians grew corn and fished in the rivers. The population was decimated by a smallpox plague after the Europeans arrived. In 1635 a group of British settlers acquired land from a local Indian tribe and named the new town Concord. The Battle of Lexington and Concord was the first battle during the American Revolutionary War.

The renowned literary history of Concord is based in the mid-19th century with Ralph Waldo Emerson having a major role. Emerson and other Transcendentalists including Nathaniel Hawthorne, the philosopher Bronson Alcott and Henry David Thoreau lived in Concord and were associates. Thoreau lived near the well known Waldon Pond. Resident Ephraim Bull developed the popular Concord grape.

Walden Pond is regarded as a kettle hole and was created by retreating glaciers. The well known writer and philosopher Henry David Thoreau lived near the pond for two years. His time spent their was recorded in Walden; or, Life in the Woods. The Walden Pond State Reservation is also a popular swimming location. Visitors often hike along the trails that traverse around the pond and also visit Thoreau's cabin.

Nearby Boston offers a variety of activities, entertainment and professional sports teams. The Nahoba Ski slopes are located in the region. The Great Meadow National Wildlife Refuge is a river wetlands area which includes several trails and is popular for bird watching. The regions's White Mountains are available for hiking and viewing the scenic fall foliage.

In this guide
Study Online in Concord
Historic Concord 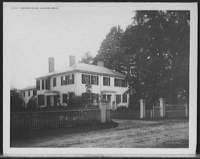 Are you an official in the Concord government or quasi-government agency such as the chamber of commerce, visitors bureau or economic development council? If so, visit our information page for government officials to see how CityTownInfo can support you.