Fall River is a city in southeastern Massachusetts, situated in an area where the Taunton River flows into the Mount Hope Bay. Located in Bristol County, the city lies about 53 miles south of Boston and 17 miles southeast of Providence, Rhode Island. Incorporated as a city in 1854, Fall River got its name from the English translation of the Wampanoag Indian name of the small river flowing through the city. The Quequechan River (the term "Quequechan" means "falling water") originally flowed unconfined over a nearly level course for more than a mile before rushing down a narrow rocky channel and visibly cascading into the Taunton River. Fall River is serviced principally by Interstate I-195, but is also served by four other major highways, including U.S. Route 6 and Massachusetts State Highways 24, 79, 81, and 138.

The history of Fall River industry traces its roots to 1811 when Colonel Joseph Durfee and several investors built the city's first cotton mill. By 1830 the town had seven textile mills and by 1872 this number had more than tripled, cementing the city's reputation as one of the textile capitals of the nation. The period from the 1870s through the 1920s marked an era of great prosperity for Fall River, which took prominence as the largest center in the United States for the manufacture of cotton textiles. Reliance on one single industry later proved to have a damaging effect on the city during the Depression era, when cheap labor beckoned the textile industry southward, leaving Fall River without its greatest economic asset. Although the industrial decline which plagued the Fall River area during much of the 20th century has since reversed itself, the city today is replete with dozens of old mill buildings now used for other purposes but which still stand as a reminder of the city's past glory.

One of Fall River's claims to fame dates back to August 1892, when a double ax murder took place in the city. The victims were the parents of Lizzie Borden, who many suspected was guilty of the crime. Over a century has passed and so have several books, a movie, and even a ballet covering the incident, and to this day the crime is still unsolved. Although found innocent of all wrongdoing, Lizzie Borden to this day remains convicted in the minds of many people. Another of Fall River's claims to fame lies in the placement of its City Hall, which is located on top of Interstate 195. The six-story structure, highly visible to interstate traffic, sits on a highway overpass at the foot of the Braga Bridge, making I-195 one of the few highways in the country with a city hall standing directly on top of it.

Each year hundreds of thousands of visitors are drawn to Battleship Cove. This "floating museum" contains the world's largest collection of 20th century U.S. Naval fighting vessels, open to the public and available for climbing aboard and exploring. On site are the Battleship Massachusetts, the Submarine USS Lionfish, the Destroyer USS Joseph P. Kennedy, Jr., the Cruiser USS Fall River, and an Elco-class and a Higgins-class P.T. Boat. The latest addition to the Fall River waterfront is the Hiddensee, a Soviet-built missile corvette originally assigned to the East German Navy but later used in the Federal German Navy following the reunification of Germany. Also located at Battleship Cove is the elegant Fall River Carousel, a fully restored circa-1930 carousel (the oldest functioning carousel in America) housed in a beautiful Victorian-style pavilion. Located adjacent to Battleship Cove on Mt. Hope Bay is the Fall River Heritage State Park, which features a waterfront esplanade, harbor boardwalk, Visitor's Center and boathouse. A short walk from Battleship Cove is the Marine Museum, which houses an extensive collection of intricate model ships and also houses the largest exhibit of Titanic memorabilia and artifacts in the nation, including a one ton, 28 foot model of the ill-fated vessel.

The mystery surrounding Lizzie Borden and the ax-murder of her parents lives on endlessly. The home where this notorious incident occurred is today a first-class bed & breakfast site, where guests are invited to choose one of six bedrooms (including the room where Abby Borden was killed) and roam the house to explore at will. Guests staying at the Lizzie Borden Bed and Breakfast are treated to a breakfast very similar to the one the Bordens ate on the morning of the murders (bananas, jonny-cakes, sugar cookies, coffee and more). In a somewhat similar vein, Fall River is also home to the Factory of Terror and Asylum of Horror, two indoor haunted houses where guests walk through a maze full of rooms in the dark, encountering disturbing sights and sounds along the way.

With its ethnically diverse population, Fall River hosts several feasts and festivals throughout the year. The city's large Portuguese community celebrates The Great Feast of the Holy Ghost of New England in mid-August. This event includes a procession, a parade and the blessing of bread and milk. Other ethnic festivals include the Cambodian New Year, the Greek Festival and a St. Patrick's parade. Early September each year brings to town the Fall River Festival of the Arts, a one-day downtown festival featuring music, art and food.

Reasonably close to both the Providence and Boston metropolitan areas, Fall River provides an excellent starting point for exploring the countless first-rate attractions available in those cities and elsewhere in nearby southern New England. Sports fans especially can find a wealth of options available within easy driving distance of the city. The city of Boston, home to a variety of professional sports teams, is about an hour away. Among the major league teams calling Boston home are the Red Sox (MLB baseball), Celtics (NBA basketball), Bruins (NHL hockey), and Cannons (MLL lacrosse). Also in town are the Boston Lobsters of World Team Tennis (WTT). A little closer to Fall River (about 30 minutes away) is the small town of Foxboro, home to a couple of big teams: the New England Patriots (NFL football) and the New England Revolution (MLS soccer). Minor league pro action can be found in Providence Rhode Island (about 20 minutes away), home of the Providence Bruins, a team in the American Hockey League (AHL) affiliated with the Boston Bruins. Residing a few minutes north of Providence in the city of Pawtucket are the Pawtucket Red Sox, a Minor League Baseball Class-AAA affiliate of the Boston Red Sox, playing in the International League.

The city of Newport Rhode Island, less than 30 minutes from Fall River in a southerly direction, is the home of the International Tennis Hall of Fame. Tennis fans can treat themselves to displays which chronicle the achievements of great players past and present in the Hall and its associated Museum. Artifacts, memorabilia, and multi-media exhibits showcase many facets of the sport's long and storied history.

The local college is Bristol Community College. Individuals who want to pursue a degree but do not have the option to attend campus courses can enroll in an online school. Students in these programs can earn their bachelor's, master's, and teaching degrees online. 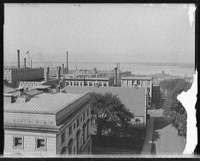 Are you an official in the Fall River government or quasi-government agency such as the chamber of commerce, visitors bureau or economic development council? If so, visit our information page for government officials to see how CityTownInfo can support you.