The city of Lynn is located on the North Shore of Massachusetts, about 10 miles northeast of Boston. Principal highways servicing the city include Massachusetts State Highways 1A, 107 and 129, although the city is also adjacent to Interstate I-95 and U.S. Route 1. The city was named after the town of King's Lynn, England, the original home of the Lynn's first minister, Samuel Whiting. Although originally an agricultural and fishing community, Lynn developed a thriving shoe industry based on the leather shoe making proficiency of its early residents. Incorporated as a town in 1631, Lynn became a city in 1850. In 1892, the city's Thomson-Houston Electric Company merged with the Edison Electric Company to form the General Electric Company, whose jet engine division remains a major employer in the city today.

Lynn has adopted the nickname "City of Firsts," in reference to the fact that the city lays claim to the following "firsts:"

Attractions in and near Lynn

Lynn is home to Lynn Woods, one of the largest municipal parks in the United States. The park spans over 2,000 acres ideal for biking, hiking, and cross-country skiing. Lynn Heritage State Park, home of the Lynn Museum, is the host site for many city festivals and events. There are also many historical sites in town, including the Mary Baker Eddy House, former home of Mary Baker Eddy, founder of the Church of Christ, Scientist, who purchased the edifice in 1875 and lived there until 1881. Lynn is also home to a professional baseball team. The North Shore Spirit belong to the Canadian-American Association of Professional Baseball (CanAm League), which is not affiliated with Major League Baseball.

Only minutes away is the city of Boston, home of several world-class sites of interest. Some of these include the Freedom Trail, the Old North Church, the New England Aquarium, the John Hancock Tower, the USS Constitution, the Boston Children's Museum, the Franklin Park Zoo, and the John Fitzgerald Kennedy Presidential Library. Boston is also the proud home of several major league pro sports teams, including the Boston Celtics (NBA basketball), Boston Red Sox (Major League Baseball), Boston Bruins (NHL hockey), and Boston Cannons (MLL lacrosse). Pro football and pro soccer can be found thirty minutes away in Foxboro Massachusetts, home of the NFL's New England Patriots and MLS's New England Revolution. 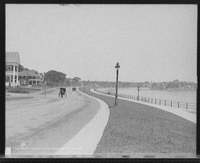 Are you an official in the Lynn government or quasi-government agency such as the chamber of commerce, visitors bureau or economic development council? If so, visit our information page for government officials to see how CityTownInfo can support you.