Medford, Massachusetts, in Middlesex county, is 4 miles NW of Boston, Massachusetts. It's situated along the Mystic River. The city features a collection of distinct neighborhoods. West Medford is regarded as an affluent area. Medford includes a large Italian population and is known for its Italian restaurants and delis as well as excellent bakeries. The city also includes a large number of Irish-Americans. Visitors have opportunities to see numerous historic sites and houses.

The area was formerly owned by Mathew Cradock. The city was established in 1630 as part of Charleston. During the 1840's and the 1850's large portions of the farmland was sold and replaced with commercial buildings and homes. It was incorporated as a city in 1892 and became a prominent location for manufacturing bricks, tile, clipper ships, Medford Crackers and rum.

In the late 19th century at Simpson's Tavern, local resident James Pierpont wrote the well known song "Jingle Bells." He was inspired by a sleigh race. Lydia Maria Child, another local resident wrote a poem which became the popular song "Over the River and Through the Woods."

Wrights Pond provides opportunities for swimming, fishing, picnicking and hiking. The city has numerous parks which offer sports venues. The Middlesex Fells Reservation is used for hiking, bicycle riding and includes a sledding area. Nearby Boston offers a variety of activities and entertainment.

Medford is home to Tufts University. 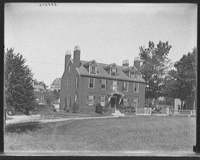 Are you an official in the Medford government or quasi-government agency such as the chamber of commerce, visitors bureau or economic development council? If so, visit our information page for government officials to see how CityTownInfo can support you.