North Adams, Massachusetts is 33 miles E of Albany, New York and 107 miles W of Boston, Massachusetts. It is in Berkshire county. The city is part of the Pittsfield metro area.

The original inhabitants of North Adams settled in this area in 1737. The city was officially recognized in 1878. North Adams is named after Samuel Adams, the famous leader and patriot who participated in the American Revolution and signed on the Declaration of Independence.

North Adams and nearby Attractions

Things To Do In North Adams

The city offers a wide range of entertainment and amusement facilities. One can visit the Historic Valley Park, Cascade Park, Church Street Historic District, Normal School Historic and the Heritage Park. You can also pay a visit to the Massachusetts Museum of Contemporary Art. The museum hosts interesting events and cultural activities.

Barnes Municipal is the nearest Airport. 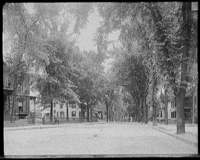 Are you an official in the North Adams government or quasi-government agency such as the chamber of commerce, visitors bureau or economic development council? If so, visit our information page for government officials to see how CityTownInfo can support you.