Northampton is situated along the Connecticut River in the Pioneer Valley. Northampton is located in Western Massachusetts in Hampshire County. Northampton is a popular place for tourists. Northampton is well known as a city which features the arts. The Paradise City Arts Festival occurs on a biannual basis and is one of the prominent art fairs in the country.

The area known as Northampton was the home to Indian tribes including the Pocomtuc, Machican and the Nonotuck. Land was bought from the Indians in 1653 and that land is now the location of the majority of Northampton. The city was established in 1654. The Hampshire and Hampden Canal was built in 1835 and made a connection to the ocean for the city of Northampton. However, due to the canal venture not being successful, a railroad was constructed along the route of the canal. In 1883 Northampton was incorporated as a city and became a center for business activities, the arts and education. Immigrants who in the early days of the city made Northampton their home include Irish, French-Canadian, and Polish.

The nearest airport for Northampton is the Westover Metropolitan Airport. For major air service the area is served by the Bradley International Airport located in Windsor Locks, Connecticut.

Northampton is home to numerous attractions including:

The Northampton area is home to the following colleges: 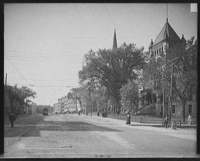 On the path to paradise (the campus, Smith College) c1904.

Are you an official in the Northampton government or quasi-government agency such as the chamber of commerce, visitors bureau or economic development council? If so, visit our information page for government officials to see how CityTownInfo can support you.