Plymouth, Massachusetts, in Plymouth county, is 34 miles SE of Boston, Massachusetts. Plymouth Rock is well known for being the final landing location of the renowned Mayflower ship and the Pilgrims. "Plimoth" is the old English spelling for the community. It's the oldest town in New England and one of the oldest in the nation. It's situated in the "South Shore."

Plymouth features an active port. Tourism is the primary industry for the historic town. Healthcare, technical/scientific research and telecommunications are important factors for the economy. The Atlantic coast portion features low plains and the western area has a hilly and forested landscape. Plymouth has numerous beaches. The climate is regarded as humid continental. The town has become popular with retirees and people who commute to Boston. Outside of downtown, Plymouth includes numerous distinct villages.

The Wampanoag Indians, known as the Patuxet, were the original inhabitants. A terrible plague occurred in approximately 1617 which killed approximately 90% of the Indians. The plague was possibly brought to the area by the British and French fishermen. Plymouth was the last landing site for the Pilgrims and their Mayflower ship. It was the first settlement for the Plymouth Colony and served as the capital. The town was established in 1620 by the English known as the "separatists," also called Pilgrims.

At the request of Massasoit, the Wampanoag Tribe Chief, an English speaking Indian named Squanto was a major help in teaching the Pilgrims how to produce important items, grow corn and offered fishing techniques and showed them the primary fishing locations. He was a major factor in their survival. In 1621 the well known first Thanksgiving took place with the Pilgrims and the Wampanoag Indians. During the 19th century fishing, shipping and rope making were flourishing. The Plymouth Cordage Company was the world's largest producer of rope and cordage products. Ship building also became a prominent industry.

The town is home to Quincy College and Curry College. 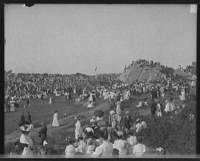 Are you an official in the Plymouth government or quasi-government agency such as the chamber of commerce, visitors bureau or economic development council? If so, visit our information page for government officials to see how CityTownInfo can support you.