East Grand Rapids and nearby Attractions

Things To Do In East Grand Rapids

There are a number of institutes offering higher educational facilities to residents of East Grand Rapids. Among these are the Aquinas College, the Grand Rapids Community College, and the Calvin College.

In this guide
Our Partner Listings
Historic East Grand Rapids 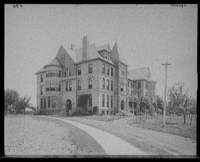 Are you an official in the East Grand Rapids government or quasi-government agency such as the chamber of commerce, visitors bureau or economic development council? If so, visit our information page for government officials to see how CityTownInfo can support you.