The Michigan city of East Lansing, best known as the home of Michigan State University (MSU), lies in northwest Ingham County and is the largest suburban community of the state capital of Lansing. Other large cities nearby include Jackson (40 miles to the south), Flint (45 miles to the northeast), Grand Rapids (65 miles to the west), and Detroit (85 miles to the east). Principal highways serving the area include Interstates I-69, I-96, and I-496; U.S. Route 127; and Michigan State Highway 43.

Incorporated as a city in 1907, East Lansing's actual origins trace back more than fifty years prior, when the State Board of Agriculture established a college for the teaching of scientific agriculture in a barely-developed wilderness a few miles east of the newly-constructed wood-framed State Capitol building. In those early days the surrounding village, officially registered as "Collegeville," owed its existence to the presence of teachers and students. Michigan Agricultural College was eventually renamed Michigan State College in 1925 and later Michigan State University in 1955. During this time the city and its university have grown in tandem, and today East Lansing is a thriving college town and Michigan State University has become the largest educational institution in the state.

Points of Interest in East Lansing

East Lansing is the cultural, artistic, and recreational center of central Michigan. Numerous large scale street festivals, outdoor concerts and special events exist year-round to entertain residents and visitors. The East Lansing Film Festival, largest of its kind in Michigan, screens a large variety of genres every spring including features, documentaries, shorts and student films from around the world. The East Lansing Art Festival is another springtime event, held on the weekend before Memorial Day. The Great Lakes Folk Festival, which takes place in August, combines the elements of an arts fair, music festival, county fair, and multi-ethnic cultural celebration into one large event. Other annual celebrations include the Annual Summer Solstice Jazz Festival (June) and the Fountain Square Concert Series (July/August). Cultural sites in town include the Kresge Art Museum, repository since 1959 of Michigan State University's collection of over 7,000 works of art; and the Michigan State University Museum, one of the oldest museums in the Midwest and the first in the state to receive affiliate status from the Smithsonian Institution in Washington, D.C. Other points of interest in and around East Lansing include the following:

For sports fans, Michigan State's outstanding NCAA Division I-A athletic program offers 14 varsity sports for men and 15 for women. The MSU Spartans participate in the Big Ten Conference in all varsity sports except ice hockey (Central Collegiate Hockey Association). Renowned nation-wide for its success in collegiate athletics, Michigan State has captured multiple national titles in football and is the only NCAA Division One Athletic program to have won multiple national championships in both football and basketball.

Neighboring Lansing is home to a professional sports team, Minor League Baseball's Lansing Lugnuts. The Lugnuts compete in the Midwest League as a Class Low-A affiliate of the Toronto Blue Jays. Less than two hours to the east is the metropolitan Detroit area, home to several major-league caliber pro teams. Among them are the NFL's Detroit Lions (football), Major League Baseball's Detroit Tigers, the NHL's Detroit Red Wings (hockey), and the National Basketball Association's Detroit Pistons. Also in the city is the Detroit Shock of the Women's National Basketball Association (WNBA). 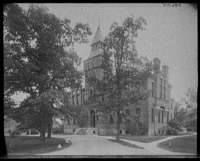 Are you an official in the East Lansing government or quasi-government agency such as the chamber of commerce, visitors bureau or economic development council? If so, visit our information page for government officials to see how CityTownInfo can support you.