Mount Clemens, Michigan, in Macomb county, is 7 miles N of St. Clair Shores, Michigan and 20 miles NE of Detroit, Michigan. The city is conveniently located inside the Detroit metropolitan area.

Mount Clemens and nearby Attractions

Things To Do In Mount Clemens

The city of Mount Clemens has a number of parks. During winter months, you can spend leisure time at the outdoor ice skating rinks of Dorothea-Leonore Park and Lawndale Park. Fishing and boating can be enjoyed at MacArthur Park, Clinton River Park and Shadyside Park. The city also has a wildlife sanctuary named Sleepy Hollow, where you will find a number of scenic trails. Apart from these, the city of Mount Clemens also includes restaurants, movie theaters and shopping areas. 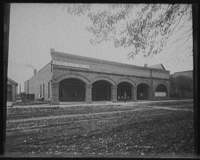 Are you an official in the Mount Clemens government or quasi-government agency such as the chamber of commerce, visitors bureau or economic development council? If so, visit our information page for government officials to see how CityTownInfo can support you.