The Odawa Indians were the original inhabitants of this region. The community was founded by Chief Ignatius Petosega, and was named in his honor. The word Petoskey is actually an Indian term meaning "where the light shines through the clouds." In the later part of the 19th century, the federal government abolished the Indian establishment, and the area was opened up for settlement. The area has a high concentration of the Petoskey stone, which is the state stone of Michigan. This stone was also named after the Odawa Indian chief.

Petoskey and nearby Attractions

Things To Do In Petoskey

Little Traverse History Museum, located in the city, houses exhibits in an 1892 railroad depot. Fort Michilimackinac, constructed by the French in the 18th century, served as a fur trading post. During the Revolution, the fort was a garrison for the British troops. It now includes reconstructed buildings that were once occupied by French, British and American troops. Fisherman's Island State Park, located on an island in Lake Michigan, features a shoreline, dunes and nature trails. Petoskey State Park and Burt Lake State Park offer facilities for camping, fishing and boating. In addition, the community organizes the Emmet-Charlevoix County Fair, the Festival on the Bay, the Winter Carnival and the C.S. Lewis Festival every year. 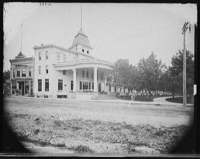 Are you an official in the Petoskey government or quasi-government agency such as the chamber of commerce, visitors bureau or economic development council? If so, visit our information page for government officials to see how CityTownInfo can support you.