The city of Winona, county seat of Winona County, is located in southeastern Minnesota on the banks of the Mississippi River. The city is situated 50 miles east of Rochester and about 135 miles southeast of the Minneapolis-St. Paul metropolitan area. Home to Winona State University and Saint Mary's College, the city is a commercial, manufacturing, and shipping center nestled within an agricultural and limestone-quarrying region.

Founded in 1851 by a steamboat captain and incorporated in 1857, Winona's was originally named Montezuma but was later renamed for a Dakota Indian princess (Winona is the phonetic pronunciation of the Dakota term meaning "first-born daughter"). The year 1858 saw the establishment of Winona Normal School in the city, a school which later became Winona State University. In 1912, St. Mary's College was founded as a private Roman Catholic school which later went on to become St. Mary's University.

Things to See and Do in Winona

Winona maintains a lively arts scene. In addition to the arts introduced to the community by its local educational institutions, Winona has two professional theater companies. The Great River Shakespeare Festival runs six weeks each summer, showcasing two Shakespeare plays in repertory. The Theatre du Mississippi presents original live plays and locally produced films in a variety of venues including the turn-of-the- century Masonic Theatre as well as outdoor sites. Housed in a 1915 brick fortress reminiscent of its original purpose as an armory, the Winona County Historical Museum displays artifacts depicting Winona's city and county history. The Minnesota Marine Art Museum, encompassing works of international and local artists, currently features four major art collections and will soon present a U.S. Army Corps of Engineers river dredge as an exhibit. Other cultural and historic sites include:

Winona is not lacking in outdoor attractions. Some of its more popular are:

Winona is rich in college sports, owing to the presence of Winona State University's athletic teams. Known as the Warriors, the University's teams compete in the NCAA's Division II and participate in the Northern Sun Intercollegiate Conference (NSIC) with the exception of the men's tennis team (North Central Conference) and the women's gymnastics team (Wisconsin Intercollegiate Athletic Conference). The Warriors football team has won the NSIC conference championship nine times since 1993 and its men's basketball team recently captured the 2006 NCAA Division II Basketball Championship, the first NCAA title for the University. 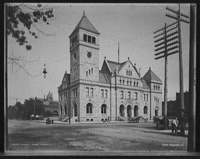 Are you an official in the Winona government or quasi-government agency such as the chamber of commerce, visitors bureau or economic development council? If so, visit our information page for government officials to see how CityTownInfo can support you.