Ocean Springs City in Jackson County was so named because of its location on the Gulf of Mexico. Initially, it was known as Lynchburg Springs. The French were among the early settlers in the area, having arrived there in the late 17th century. They were followed by the British and Spanish people. It was in the year 1817 that the region came under the American domination and development began in the city area. In 1854, the city was christened Ocean Springs.

Ocean Springs and nearby Attractions

Things To Do In Ocean Springs

The historic city of Ocean Springs offers visitors easy access to a number of museums and historic parks. Among them include the Walter Anderson Museum of Art and Ohr-O'Keefe Museum of Art. The facilities for camping, fishing and swimming at the Shepard State Park draw huge crowds to this place. Tourists can also visit the Gulf Islands National Seashore, which is a major tourist attraction.

Air transportation is available from the Jackson International Airport. 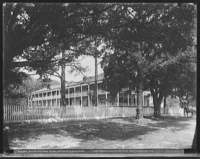 Are you an official in the Ocean Springs government or quasi-government agency such as the chamber of commerce, visitors bureau or economic development council? If so, visit our information page for government officials to see how CityTownInfo can support you.