Laconia was originally inhabited by the Abenaki Indians. A fort was built at in Laconia in 1746. Europeans first arrived in 1761, when the town was known as Meredith Bridge. The first lumber and grist mills in the area were established in 1765. It became the county seat of Belknap County in 1840. A railroad first entered the town in 1849. It was incorporated as the Town of Laconia in 1855. The town was named after the Laconia Company, a development company that sold land during the colonial era.

Laconia and nearby Attractions

Things To Do In Laconia

While in Laconia, visitors can spend their leisure at the Endicott Park Beach. The Endicott Rock Park, Leavitt Park, Opechee Park, Bond Park and Leavitt Park Playground are some of the local parks. Laconia Country Club provides excellent facilities for golfers. Those interested in the area’s history should visit the Lake Winnipesaukee Historical Society Museum, Mount Kearsarge Indian Museum, Wright Museum and the Sandwich Historical Society Museum. The city hosts the WinterFest every February. 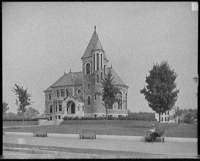 Are you an official in the Laconia government or quasi-government agency such as the chamber of commerce, visitors bureau or economic development council? If so, visit our information page for government officials to see how CityTownInfo can support you.