Kingston is situated on the west bank of the Hudson River in Ulster County. The city has three neighborhoods known as uptown, midtown and downtown. The uptown and the downtown are historic districts. A wide variety of architecture such as Art Deco, Victorian, Greek Revival, Italianate, Neo-Classical and Romanesque are located in the city. The downtown has a prominent artist community and notable art galleries.

The area was originally named Esopus; the name of an Indian tribe and was one of the primary communities in New Netherland. The British took over the Dutch colony and changed the name to Kingston in 1664. It became the first capital of the state of New York in 1777. After the Battle of Saratoga was over, Kingston was set on fire by British soldiers. The fire destroyed most of the buildings and a significant granary.

The city of Rondout which is now part of Kingston, was an important freight center for moving coal from Pennsylvania to New York City. Due to major deposits of bluestone and cement the region was a prime location for quarrying, which began in 1844. The Newark Lime and Cement Company was sending cement all over the country. The brick making industry was thriving and was a significant factor for the economy.

The Kingston Heritage Trail provides visitors the opportunity to see notable historic structures. There are a large number of noteworthy art galleries and theaters in the city. A cruise on the Hudson River is popular with tourists. The King Jazz Festival is a prominent event. 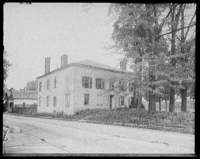 Are you an official in the Kingston government or quasi-government agency such as the chamber of commerce, visitors bureau or economic development council? If so, visit our information page for government officials to see how CityTownInfo can support you.