The Weckquaesgeck Native American were the original occupants of this region. In the early 17th century, these natives shared a relatively peaceful relationship with the Dutch, but by 1643 frequent skirmishes occurred between the two. Dutchman Adriaen Van der Donck published a work in 1655 which referred to the Pocantico River valley as Sleepers' Haven. This name was later anglicized as Sleepy Hollow, and applied to the Pocantico River Valley. After the area was seized by British in 1664, Frederick Philipse, a Dutchman, bought large tracts of land from the tribes and settled along the eastern side of the Hudson River. The entire purchase included the area now known as Sleepy Hollow. The village was originally incorporated as North Tarrytown in 1874. It was renamed Sleepy Hollow in March of 1997.

Sleepy Hollow and nearby Attractions

Things To Do In Sleepy Hollow

Sleepy Hollow is home to a number of places of historic interest. Philipsburg Manor, which served as a water mill and trading site in the 17th century, is located in the village. The Rockefeller State Park Preserve, located alongside the Hudson River, offers birdwatching, hiking, running, horseback riding and sport fishing opportunities. In fact, this preserve is particularly well known for its wildlife, as it is home to over 180 species of birds. Patriot's Park, also located in Sleepy Hollow, commemorates the spot where British officer John Andre was captured during the Revolutionary War. Local golfers can enjoy a round at the Broad Acres Golf Course. Other popular attractions in the area include the Hudson River Museum of Westchester, the Stony Point Battlefield State Historic Site, the Bergen County Zoological Park, the George Washington Bridge and the New York Botanical Garden. 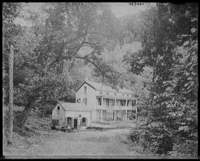 Are you an official in the Sleepy Hollow government or quasi-government agency such as the chamber of commerce, visitors bureau or economic development council? If so, visit our information page for government officials to see how CityTownInfo can support you.