Solvay, New York, in Onondaga County, is 3 miles W of Syracuse, New York and 135 miles E of Buffalo, New York. The village is included in the Syracuse metropolitan area.

Solvay is located in Onondaga County, New York. The village was founded by James Geddes in 1794, and named Geddesville. The earliest residents in this area were predominantly Irish, followed by South Tyrolians and Poles. Today, Italian Americans make up the majority of Solvay’s population. Its name was changed from Geddesville to Solvay in 1884, after the Solvay processing company built a plant in the area and began producing soda ash. Solvay was formally incorporated as a village in 1895.

Solvay and nearby Attractions

Things To Do In Solvay

Nearby museums include the Bridge House Museum, the Chittenango Landing Canal Boat Museum and the Everson Museum of Art. Nearby parks include Chittenango Falls State Park, Green Lakes State Park and Oneida Shores County Park. The Rosamond Gifford Zoo is nearby as well. 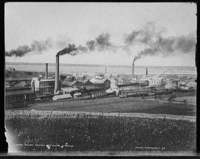 Are you an official in the Solvay government or quasi-government agency such as the chamber of commerce, visitors bureau or economic development council? If so, visit our information page for government officials to see how CityTownInfo can support you.