According to historical records, the first house was built in this area sometime in 1645. Writer Washington Irving was a resident of Tarrytown, and claimed the name of the town originated from the local women whose husbands spent a lot of time in the village tavern. However, historians believe that the name of the village was derived from a Dutch term for "wheat." In the past, this village served as a place for steamboat landing. Tarrytown was officially incorporated in 1870.

Tarrytown and nearby Attractions

Things To Do In Tarrytown

The Rockefeller State Preserve has facilities for a diverse range of activities like hiking, camping and picnicking. One can also visit sites of historical importance like the DeWint House, which served as Washington's headquarters during the espionage trial of the British Major John Andre. The Tarrytown Street Fair is a local celebration which is held annually in June.

Marymount College is the local institution providing facilities for higher education. Other such institutions in the neighborhood include Mercy College and Iona College. 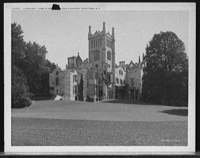 Are you an official in the Tarrytown government or quasi-government agency such as the chamber of commerce, visitors bureau or economic development council? If so, visit our information page for government officials to see how CityTownInfo can support you.