Utica is located in Oneida County, in the central portion of the state of New York. The city is part of Mohawk Valley and is situated near the Mohawk River, New York Barge Canal and the Erie Canal. The city was named after a historic North African city which had been Rome's capital in Africa.

Old Fort Schuyler was the first settlement in the Utica area. It was established in 1758 and was utilized during the French and Indian War. The settlement was ruined during the American Revolutionary War by Tories and Native Americans. Companies began to build factories in Utica primarily due to the city being situated near the Erie Canal. During the late 19th Century Utica was recognized as the center of the textile industry for the country. However, during the mid-20th Century the vast majority of the textile companies vacated the city and established their factories in the southern portion of the country.

During the late 19th Century and the early stages of the 20th Century Utica became prominent in the tool an die business. In the beginning and middle portion of the 20th Century the city was home to a manufacturing facility of General Electric which produced radios. Utica was called "the Radio capital of the world." The town is part of the Northeastern Rust Belt which experienced a significant decline in the manufacturing industries.

Utica is served by the Hancock Airport, located in Syracuse and by the Albany International Airport.

Utica is home to State University of New York Institute of Technology, Utica College, the Utica School of Commerce and the Mohawk Valley Community College. 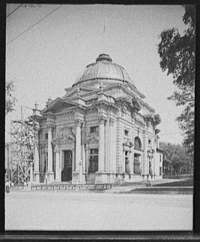 Are you an official in the Utica government or quasi-government agency such as the chamber of commerce, visitors bureau or economic development council? If so, visit our information page for government officials to see how CityTownInfo can support you.