Scranton is located in Lackawanna County in the northeastern portion of Pennsylvania. It's the biggest city in a group of neighboring municipalities that were formerly coal mining communities. In 1866 Scranton was incorporated as a city. The Green Ridge and the Hill Section of Scranton feature the mansions constructed by former coal entrepreneurs.

The area of Scranton was settled by pioneers from New England during the late 1700's. In the middle of the 1800's the iron and steel industries caused significant growth in the Scranton area. In 1851 the Delaware, Lackawanna and Western Railroad was established to move iron products as well as coal out of the Lackawanna Valley. The borough of Scranton was incorporated in 1856 and took its name in recognition of the brothers Seldon and George Scranton who began their industrial careers by producing T-rails for the railroads and helped to transform Scranton into a significant industrial area. In 1886 Scranton became home to the country's first successful continuously working electric streetcar system.

The city became known as "the Electric City." In 1890 an additional three other railroads had built systems to transport the vast quantity of coal located in the area. Due to the decreased supply of the region's iron ore the Lackawanna Steel Company moved out of Scranton and the city no longer had the industry that established the city. Scranton then became the center of the coal industry in the state of Pennsylvania. The production of coal and railroad traffic decreased significantly during the 1950's.

The County of Lackawanna Transit System offers bus services for the city. The Wilkes-Barre/Scranton International Airport is situated in neighboring Avoca. Martz Trailways and Greyhound Lines offer bus transportation to cities located in the Northeast.

There are numerous attractions in the Scranton area including:

The University of Scranton is a Jesuit University. The university is comprised of four colleges; The Panuska College of Professional Studies, The College of Arts and Sciences, The Kania School of Management and The College of Graduate and Continuing Education. Other colleges in the area include: 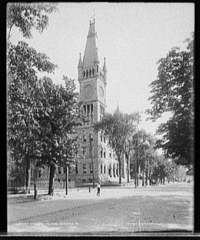 Are you an official in the Scranton government or quasi-government agency such as the chamber of commerce, visitors bureau or economic development council? If so, visit our information page for government officials to see how CityTownInfo can support you.