Galveston, Texas, in Galveston county, is 46 miles SE of Houston, Texas. The city is included in the Galveston - Texas City metropolitan area.

The area now known as Galveston was originally inhabited by the Karankawa and Akokisa tribes. At that time, the region was called Auia by local Indians. Jo’s de Evia, the Spanish explorer, named the area Gélvez town or Gélveztown, after County Bernardo de Gélvez, in 1785. The area was first settled in by Europeans around 1816. The City of Galveston was incorporated in 1839. The first post office of the city was established in 1836. The city was the site of the Battle of Galveston which was fought on January 1, 1863.

Galveston and nearby Attractions

Things To Do In Galveston 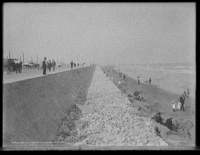 Seawall and beach between 1910 and 1920
Additional Resources

Are you an official in the Galveston government or quasi-government agency such as the chamber of commerce, visitors bureau or economic development council? If so, visit our information page for government officials to see how CityTownInfo can support you.