Beloit, Wisconsin, in Rock county, is located 12 miles S of Janesville, Wisconsin (center to center) and is 67 miles SW of Milwaukee, Wisconsin. The city is included in the Janesville - Beloit metropolitan area.

The Winnebago Indians were the original inhabitants of Beloit. At that time, the area was known as the Village of Ke-chunk-nee-shun-nuk-ra. The first white settler of the area was a French trapper called Joseph Thiebault who arrived in the 1820s. The present name of the city was derived from a French term "Balotte" meaning handsome ground. The city was established in 1836. The Beloit College was founded in the city in 1846. It was originally incorporated on February 24, 1846 as a village. Later on March 31, 1856, it was recognized as a city. A Council - Manager form of government was adopted in 1929.

Beloit and nearby Attractions

Things To Do In Beloit

Beloit College is the local higher education institution. Others in the neighborhood include Rock Valley College, Kishwaukee College, and University of Wisconsin - Whitewater. 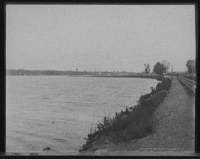 Beloit (Rock River above the bridge) 1898

Are you an official in the Beloit government or quasi-government agency such as the chamber of commerce, visitors bureau or economic development council? If so, visit our information page for government officials to see how CityTownInfo can support you.