Kaukauna, Wisconsin, in Outagamie county, is 7 miles E of Appleton, Wisconsin and 87 miles N of Milwaukee, Wisconsin. The city is part of the Appleton-Oshkosh-Neenah metropolitan statistical area.

The city now known as Kaukauna was known as "The Lion on the Fox" during the 1880s. The city was officially incorporated in 1885. Charles A. Grignon was given Wisconsin’s first land deed and then built a mansion on the northern side of Kaukauna, which now operates as a museum of the Outagamie County Historical Society. The Fox River divides the city into the South Side and the North Side. The name of the community is derived from an Indian word, translated as "crow nestling place" or "long portage."

Kaukauna and nearby Attractions

Things To Do In Kaukauna

Austin Straubel International Airport is nearby.

Students in the area can pursue higher education at Lakeland College, Northeast Wisconsin Technical College and at the University of Wisconsin-Green Bay. 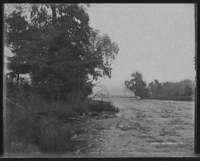 Are you an official in the Kaukauna government or quasi-government agency such as the chamber of commerce, visitors bureau or economic development council? If so, visit our information page for government officials to see how CityTownInfo can support you.