The city was named after Geneva, New York, as early settler John Brink found a similarity between the areas. The community was named Lake Geneva in order to avoid confusion with Geneva, Illinois, which is located nearby. The area gradually became a popular summer retreat because of the railroad access from Chicago. The area is also nicknamed "The Hamptons of the Midwest." The community functions under a mayor-council form of government.

Lake Geneva and nearby Attractions

Things To Do In Lake Geneva

While in Lake Geneva, one can visit parks like the Richard Bong State Recreation Area, Big Foot Beach State Park, Moraine Hills State Park and Seminary Park, which offer various recreational opportunities. Golfers can enjoy a round at the Hillmoor Golf Club, the Geneva National Golf Club, the Abbey Springs Golf Course and the George Williams Golf Course. Local churches include Saint Francis de Sales Roman Catholic Church, the First Methodist Church and the Church of the Holy Communion. Festivals hosted by the city include Winterfest, Oktoberfest and Art in the Park, which is held ever August.

Elgin Community College, the College of Lake County and Carroll College are the local colleges. 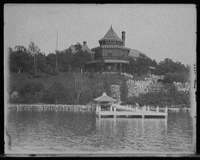 Are you an official in the Lake Geneva government or quasi-government agency such as the chamber of commerce, visitors bureau or economic development council? If so, visit our information page for government officials to see how CityTownInfo can support you.